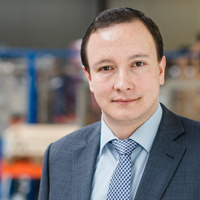 “The building of such a biogas waste plant can, fundamentally, be realised in every town and every country.”

bwe integrated an unpacking technology, which has been proven many times, in the waste systems made by the British market leader Agrivert. In the meantime Agrivert has built waste systems in seven locations in England and Wales. Cassington and Wallingford near Oxford, West-London and Courses Farm near London, Coleshill and Roundhill near Birmingham and Stormy Down near Swansea, South-Wales.

For the waste from the city of Oxford Agrivert erected the first system with bwe technology. It has been in operation since the end of 2009.

Food leftovers and kitchen waste from the communal collection serve as input, from time to time also grass silage and wheat. Up to 150 tons of these very inhomogeneous materials are processed there daily.

The total capacity is 2.1 MWel. The average degree of utilisation is - from building till today - 95 per cent. In comparison: The average value for all waste systems in England is 70 per cent.

Awards as a result

As a result the system in West-London fitted out by bwe was awarded the UK AD & Biogas Industry Award in the years 2015 and 2016 for high performance.

bwe puts the system operator in a position where he can reliably control the biological processes. Agrivert’s and bwe’s many years of experience was a benefit for the Friesoythe company in becoming one of the first to feed biogas plants with waste.

With a legislative change at the beginning of 2010, the British government created the best conditions for the building of biogas plants that transform waste into heat and energy. They introduced a tax on organic waste - with the consequence that the costs for waste disposal sites continuously increased. As a result of waste separation and waste processing with biogas the costs for the end-user, however, remain constant. Background: Great Britain wants to realign itself - to sustainable processes- Anaerobic fermentation is politically desirable; bio-waste systems are therefore the favoured technology.