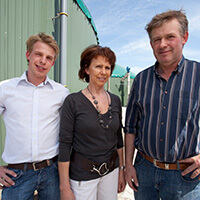 “What particularly impressed me was the speed with which the planning, building and initial start-up took place. Only a few months after the first consultation our new biogas plant went into operation. Today it is running with almost 100 per cent utilisation.”

The Wienken family’s farm power station in Augustenfeld near Loningen is the first system of this size built by bwe. Originally the farm operator had planned to install a straw heating.

Small systems subsidised by the state

Since, however, the input materials are completely available on the farm, the decision in favour of a biogas plant from bwe seemed obvious. One crucial factor for the decision was, among others, the state subsidies for small systems. In the past years these have become more and more a focus of the branch. Especially for farmers they offer a very good entry possibility into the technology.

Input almost completely from the own farm.

The system in Wienken went into operation as early as 2008 and today convinces with almost 100% utilisation. Die heat generated is used in the area for rearing laying hens, sow-keeping and piglet rearing. The input materials come almost completely from the own operation. Daily, approximately 9 tons of maize silage, 350 kg of dry excrement and eight cubic metres of pig slurry are used.

The high yield and the robust technology, which convinces due to a high level of automation and optimal process flows, were rated very highly.